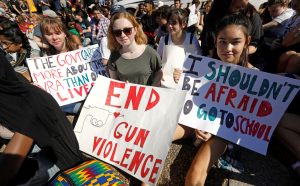 Students who walked out of their Montgomery County, Maryland, schools protest against gun violence in front of the White House in Washington, U.S., February 21, 2018. REUTERS/Kevin Lamarque – RC164B322F90

The student walkout last Wednesday presented an excellent parenting opportunity. Sadly, a significant number of parents failed to recognize the opportunity. Instead, many of them sided with authoritarian school boards who insisted that any student who walked out of class in honor of the seventeen students killed at Florida’s Parkland high school should receive disciplinary action for his/her outrageous rebellion.

Parents had the choice to support this, to teach their kids about the history of protest that forms the foundation of our nation. Our country began as a protest. Important change over the subsequent centuries occurred due to protest, not quiet little acceptable moments condoned by the powers that be, but full-bodied march-in-the-streets, dump-your-damn-tea-overboard protests. This was a chance for parents and community leaders to demonstrate a true understanding of what protest means to our nation.

And to our future.

It’s sad to see that so many don’t understand, tragic that so many accept the conditioning to stand quietly and wait for someone to tell you what to do, what to think. It bodes ill for our future that what we seem to be teaching in our schools and homes today focuses on doing what we’re told instead of what is right. Sit in your assigned desk. Don’t talk. Remember to bring a pencil. Stand quietly in line.

This is training for lock-step corporate workers, not the thinking adults needed to guide our nation forward in a time of great global change. Where is the critical thinking, the understanding of history, that education is supposed to instill?

Yes, the need to stand up for the right thing may have consequences. Many of the students who walked out of class despite draconian threats of suspension and other disciplinary action understood and stood up for their rights anyway. This alone should cheer us all with hope for our collective future.

The acceptance and embrace of authoritarianism raised its ugly head last week, a fitting reminder of the mindset that allowed Donald Trump to become president. Above all else, his election to the highest office in our political system reflects this pervasive eagerness for an authority figure who claims to know the right path. This world view reflects the fear of so many who can’t catch up with the times,  with a world going too fast for their 19th century brains to understand what is required of them. They don’t like change. So the solution is a strict set of simple rules enforced by a blustering promise-maker.

These kids aren’t having it. Thank you, kids.