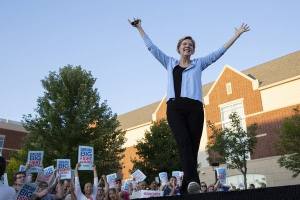 Perhaps the root cause of Warren’s disappointing showing in both Iowa and New Hampshire and her seeming inability to climb out from under the shadows of male candidates have nothing to do with her policies. Perhaps her poor showing has more to do with unconscious triggers embedded in the human genome.

Consider her voice, high pitched and often squeaky, with hoarse breaks as she tries to increase her volume for emphasis. I sometimes cringe when this happens. My reaction to her delivery often drowns out whatever she is trying to say. Am I alone?

“We understand that we find certain voices more soothing or grounded. And these tend to be deeper voices,” says Brian Lee, a voice communication expert who founded Be The Voice Academy. “High-pitched voices, on the other hand, can be unpleasant or cause anxiety.”

“These sentiments are echoed by Carina Tien, who founded The Voice Room in 2003. She shares that CEOs who are speaking on stage, for instance, tend to tone down their voices in order to be perceived as assertive or authoritative.

“In contrast, high voices tend to communicate high energy, and as such, ‘Don’t give people a serious impression.’”

The article I’m quoting, “The Science of Hating Someone for their Voice,” goes on to provide scientific data measuring various voice pitches against the listener’s reaction. No wonder people who are serious about making their points effectively often end up working with a voice coach.[1]

I don’t hate Warren. I think she’s got great ideas. Her fans appreciate the minutia of her policy plans although many others don’t dig that deep. But she might benefit from a voice coach – assuming it’s not already too late. Her poor showing in Iowa and New Hampshire will be difficult to overcome.

Another trademark characteristic of Elizabeth Warren’s public appearances is her wildly waving arms. She does this to demonstrate and generate excitement. But that’s likely not the effect on most observers.

“Wildly waving arms” is a distraction, according to a pastor’s advice to other pastors. Along with pacing and “sprinkler-like torso turns,” such movements are “not ways to emphasize the point.” Creating stillness, the advice continues, “allows listeners to feel the sermon without being distracted by unnecessary gestures.”[2]

In real life, humans instinctively see such gestures as a signal that someone is desperate for rescue from drowning or trying to regain balance as they teeter on the edge of a cliff – not the message Warren means to send. Rapid arm movement suggests frenzy or some form of emergency, none of which is helpful to conveying Warren’s intelligent message.

Women have a hard enough time breaking into the traditionally male enclave of politics. With two strikes already against her because of her gender, Warren has managed to gain public office by meeting and greeting people on a personal basis where waving arms and high squeaky rants aren’t involved. But that doesn’t work in big rallies and the types of appearances required in a presidential campaign.

Shrill voices trigger an innate reaction reminiscent to many of an angry mom or wife who rants while pointing her finger – emotional, volatile, bossy and nagging. This image doesn’t serve her well.

As for women in general, take the disparagement of Hillary Clinton who had the serious demeanor and determined strength people prize among men. Her voice wasn’t particularly high and she didn’t wave her arms. But among women, whose gender norms involve a comforting, maternal presence, Hillary’s strength and determination framed her as a cold unnatural bitch. That made her the perfect candidate upon which to hang the Republican’s most effective hot button: abortion, the “unnatural” female act.

Those who know Hillary personally say nothing could be further from the truth, but that’s worth nothing when you’re trying to persuade millions of people to care about you. 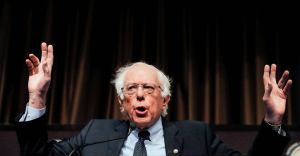 Not that men don’t have appearance and behavioral issues that turn off voters. Bernie’s entrenched presentation method involves an angry frown accompanied by arm waving as if he’s conducting a Tchaikovsky symphony. These elements of his body language are distracting. After watching him on multiple occasions, one interprets the underlying message, that he’s stuck in a habit and rigid in his beliefs in the same way that he can’t stop with the arms or frown.

Which is, ironically, one of the characteristics many of his fans prize the most. He’s been preaching the same leftist ideas for over fifty years. To many, that makes him authentic. To many others, it means that he is not well suited to a job that requires thinking on his feet to deal with unexpected developments. 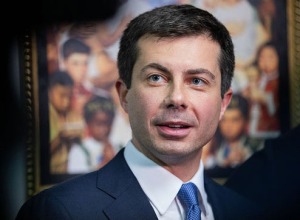 It’s worth noting that Buttigieg doesn’t frown, doesn’t wave his arms, and smiles a lot when speaking intelligently and calmly about his position on the issues. This alone could help explain Buttigieg’s stunning rise in the candidate ranks.

Few people listening to these speakers investigate their gut reactions to analyze whether it’s a squeaky voice, waving arms, or smiles that make them like or dislike a particular political hopeful.

Psychologists who study body language more or less agree that less than 10% of what someone says is communicated through words alone. “The numbers represent the percentages of importance that varying communication channels have. The belief is that 55% of communication is body language, 38% is the tone of voice, and 7% is the actual words spoken.”[3] Researchers rush to point out that circumstances can significantly influence the exact formula.

Researchers have also noted that for politicians in particular, nonverbal behavior is a major contributing factor to the audience’s lasting impression. “According to University of Pittsburgh Political Communications Professor Jerry Shuster, body language, mannerisms and facial expressions are 85 percent of what an audience takes away.”[4]

Again, these reactions are for the most part not recognized consciously by people in the audience. We walk away from a speech or flip the TV channel because we don’t like someone. Or we dismiss what a candidate is saying because they annoy us. Often, we can’t get past the body language/voice issue to really hear what they’re saying about their plans and aspirations for the office, should they be elected.

We’re not as intellectual about such things as we might think. As noted in a Wikipedia article about body language, “…if a person is feeling confident, then their breathing pattern will deepen, their intra-abdominal pressure (IAP) will increase, and their tone of voice will sound fuller and stronger. If they are feeling anxious, their breathing will become too shallow, their IAP will decrease, and their voice will sound thinner and weaker.” We want strong confident leaders, so our subconscious takeaway on voice matters.

Anyone who plays poker can verify that body language often makes or breaks a player’s game, and the same is true for politicians. Once you begin analyzing what you’re actually thinking as you watch and hear candidates or politicians speak, you’ll come to understand the power of this primal type of analysis. 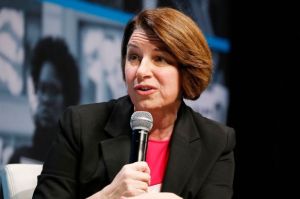 Warren would be well served to lower her voice, speak from her diaphragm rather than her throat, and stop waving her arms. One of the advantages of Klobuchar is her low voice and resolute stance. No arm waving.

Sanders would benefit from a lot more smiling and positive slant in his speeches and for heaven’s sake, no more conducting. It’s doubtful he’s capable of this change, which again speaks to the overall impression of his ability to serve well as president. 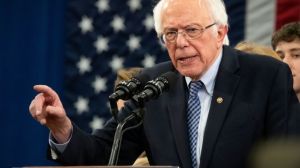 Buttigieg may have already figured all this out. If you watch him, his easy-going presence immediately puts his audience into a calm and pleasant state of mind. We’re eager for calm and pleasant after the current president’s erratic, angry behavior.

Warren’s complex policy plans may put off many voters who don’t have the time or interest to wade through the details, although Warren seems to believe that the minutia of her proposals are key to her winning. Wrong. It’s bad enough to carry the ‘female’ baggage when running for president—too emotional, easily hysterical.

Men don’t escape from problems when violating gender norms. Buttigieg especially, as a gay man, has to avoid seeming weak. His military service helps him in this regard as does his athletic appearance, ever-present after-five shadow, and confident manner even when confronted with criticism.

Chances are that someone has mentioned these body language issues to both Sanders and Warren. It’s easy to imagine that their reaction was to cling fiercely to how they are naturally without any makeover. They’re both proud of their authenticity and may see such modifications as falsification. But just as people dress appropriately and manage a groomed hairstyle in order to create a better public image, so must they pay attention to body language and voice in order to more effectively communicate their potential. 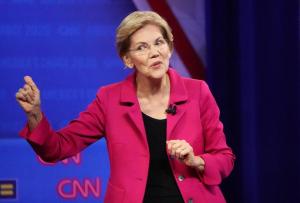