Conrad Yoes, pictured here, was among the earliest settlers along the West Fork valley, arriving around 1822. The extended Yoes family, recent immigrants from Germany, sent down strong roots and became an influential part of county history. Conrad became nicknamed as “Coon Rod” because of his willingness to cross high water creeks on a log in order to carry out his preaching mission. According to a descendant,

“He started on his circuit one day, came to the creek, the ford could not be crossed, so he found where someone had felled a tree across the stream so he “cooned” it and so got that nickname.

In another of Bert Yoes recollections about his grandfather, he said that Conrad was a “small man” who could “conjure warts and stop blood flow.”

Conrad Yoes’ son, Jacob “Black Jake” Yoes served in Union forces during the Civil War then as sheriff of Washington County. With the timber boom that came with the opening of the railroad in 1882, Jacob turned his energy to building a business empire with mercantiles at multiple stops between Fayetteville and Van Buren. The two-story brick store he built at West Fork remains standing today. In 1889, Jacob became a legendary U. S. Marshal working for Hanging’ Judge Parker at Fort Smith, allegedly the inspiration for John Wayne’s famous role in the movie “Big Jake.”

The story of the Yoes family is just one of many documented in these pages, all of them building lives and rich histories along the river valley, all of it fascinating to anyone interested in the 19th century settlement of Washington County.

The West Fork of White River created the West Fork valley and continues to shape it today. Streams, creeks, and springs drain down the steep hillsides to form the river and carve this particular place on Earth. This book is about that valley, how it formed over millions of years, how Nature filled it with plants and animals, how Native people found sustenance and shelter here. And then the immigrants came, arriving from the eastern seaboard of the early colonies, from Europe and beyond. Within these pages are the stories of the first settlers here, the roads and towns they made, the war they fought, and their paths to survival through the end of the 19th century.

Subsequent chapters describe the mills, churches, and early roads as well as the neighbor-to-neighbor conflict of the Civil War. Stagecoaches hurtled down the valley roads, later supplanted by the iron horse with the completion of the railroad tunnel at Winslow. A chapter on crime reveals shootouts, knife fights, and barn burning. Histories of Winslow, Brentwood, Woolsey, West Fork, and Greenland outline their origins and heydays.

One of several 5 star reviews: “The research involved to create such a great history is very obvious. I wanted to know more about my home which was built in 1840 and the family behind many of the objects found on the property. Ms. Campbell’s book answered many of those questions and helped me develop a treasured sense of place. We seem to have lost our appreciation for where we came from and how we created communities. So great to see Campbell’s thorough research and ability to bring the past alive.”

Get your copy today at Amazon.com or at the Headquarters House offices of the Washington County Historical Society.

I moved into the West Fork Valley in 1973. I had no previous experience here except, as a child, one train ride from Fort Smith to Fayetteville circa 1952 and then passing back and forth from Fort Smith to Fayetteville during the 1950s in our 1949 Chevy (and later our 1954 Chevy). Driving Highway 71 in those days provoked high tension whether we had to pull over to wait out a driving rainstorm or creep along due to impenetrable fog or shudder as big trucks zoomed past.

Mount Gayler provoked an outcry from me and my younger sister—could we stop and have pie at Burns Gables? Could we ride the train? Only one time that I remember did the journey involve stopping for a train ride, a thrilling dash along the tracks circling the pond, wind in my hair, grinning as the high-pitched whistle blew. Another time we sat around a table at Burns Gables to savor a slab of delicious pecan pie.

The landscape of high mountains and sheer cliffs made its mark in my memory. For years my amateur drawings portrayed hills of the same height marching off into the distance in ever faded color. I never understood why it seemed mountains should look that way until, as an adult, I took another look at the profile of the Boston Mountains framing the West Fork valley.

Passing through West Fork on our way north marked the last hurdle before finally reaching Fayetteville, but the only thing that lodged in my memory about the place was the rock “tourist court” along the highway. Then the green-and-white rotating light flashed through the sky at the Fayetteville airport, a magical sight in fog or rain. In those days on that two-lane narrow highway, the trip took nearly three hours.

Imagine my surprise when, in middle age, I discovered that I had ancestors buried at Brentwood and Woolsey! After the Civil War, my dad’s grandfather, Charles McDonald Pitts, moved from Johnson County, Arkansas, to the Brentwood area along with his mother Elizabeth and several brothers and their families. Charles’ mother and his first wife Easter (Parker) and newborn daughter Tennessee are buried at Brentwood as well as a young niece Eliza. Two brothers and some of their children are buried at Woolsey. Charles would remarry there, a local girl named Linnie Mae Rose who became my great-grandmother. The Pitts family moved away by 1900 to take up residence in the western part of the county. 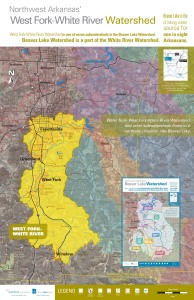 Now, after nearly fifty years of living here, I can almost claim to be an old timer. But fifty years is nothing compared to the two hundred years of family heritage a few of the valley’s residents can claim. I wanted to know who came here first, who built these towns, what it was like to carve out a living in this rugged land. So I started digging.

The West Fork Valley, my new release, is what I found, a history of the watershed of the West Fork of White River, its natural wonders, its past, its people through 1900. It’s my great pleasure to announce this book to the world!

Visit the book page on this site for more information and purchase link.