If you plan to read this book, be warned there are spoilers ahead.

This book was hard to read in places, not because of poor writing. If the writing had been less skillful, I wouldn’t have been able to read it at all. It was hard to read because I kept having an intellectual argument about how people could be so stupid.

The transcendental meditation movement, in particular the cult following of Maharishi Mahesh Yogi, never made sense to me. I had carefully extricated myself from another cult, that of the Church of Christ so fully embraced by my parents, so I never remotely entertained the idea of allowing another rigid structure to sit on my head and eat the days of my life.

I get that some people want to run and hide inside concepts like this, like someone has figured shit out and if you just listen to them and do what they say, you’ll see the light. Sorry, but it really doesn’t work that way. You can’t find nirvana on someone else’s path.

As far as I’m concerned, that’s the entire problem with all religions. Somebody has an epiphany and tells others about this amazing understanding. They they decide to start spreading the word — what the person was doing/eating/wearing when the epiphany occurred, what he thinks the epiphany means, and then creating a set of rules on how to live and what to believe in order to duplicate that epiphany.

What you get that way is a life of servitude to someone else’s explanation of what they saw/heard/believe all while guaranteeing that you will not ever experience an epiphany of your own.

So this story of a woman’s growing up years with an alcoholic father and a mother who took refuge in TM rubbed me completely the wrong way. Even more upsetting was the author’s failure, after living through this and theoretically reaching adulthood able to think for herself, to ultimately call BS on the whole process. 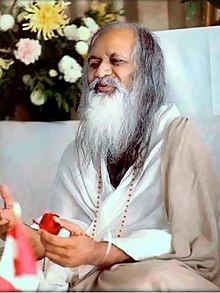 Yes, maybe meditation is a useful practice. I choose not to waste my time that way, but if it works to bring relaxation and peace of mind to some, that’s fine. It’s your life. But nowhere in this book does the author really come out and say that TM under the Maharishi was a bucket of warm spit engineered with his personal satisfaction and enrichment as the goal. She doesn’t say that her mom, herself, and all the other people she knew were suckered into feeding this weasel’s grandiose scheme.

She does manage to accurately report the ultimate scandal resulting from media exposure of his scheme and share with readers the timeline of his rise and fall. That’s valuable. And it’s valuable that she acknowledges the time and effort it took for her to distance herself from the cult aspect of his teachings.

What disappointed me so greatly was her inability to disavow TM and its impact on her life. She never criticized her mother for being a gullible slave to the Maharishi and for dragging her children through the poverty and deprivation of a cult family. There’s still a lot of introspection due this author which, hopefully, might lead to a later work with more anger about what was inflicted on her.

For me, the book was an eye opener, yet another one, on the subject of how deluded people can be about issues of religion and spirit. Very depressing.