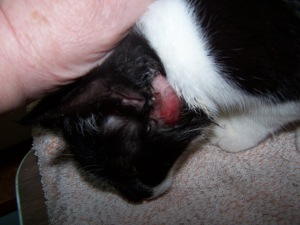 First affected area under the left ear, about ten days in.

Follow-up on the ringworm nightmare with my kitten Hellion, who appeared from under my barn in early June, apparently yet another dumped animal on this rural road. She weighed two pounds at that point and the vet thought she was about two months old. Of course she was terrified and hungry, but not completely feral, and after a week or so with food and lots of cuddles, she was quick to purr when held and petted.

On September 11, I noticed a small raw spot under her left ear about the diameter of a pencil eraser. By Saturday 9/14, the spot had increased to the diameter of a half dollar. The surface area was raw and oozing clear liquid, her hair coming off as it continued to expand. On the 16th, I took her to the vet who wasn’t sure whether it was an injury or a fungus. He cleaned the area and gave her a shot of antibiotics.

The infected area continued to expand. On Friday Sept 20, I took her back to the vet. He said surely it was a fungus and gave Conzol, a topical anti-fungal spray, Ketoconazole as an oral, and anti-fungal shampoo. I was to bathe her at least 3 times a week.

Not happy that he had not recognized the problem at my first visit, I sought a second opinion the next day. The new vet said she could do a lab test, but it would take 7-10 days. The first vet had also suggested a lab test, but was dismissive of the idea because of the time required to get results. At this point, I wanted to know what we were dealing with, so the second vet took a skin sample and in response to my concerns about the ketoconazole suggested a less potent oral med in pill form.

Although this photo is of the original area, this is the type of open wound that spread over her shoulders, up the back of her neck, onto her ears, and around her right cheek and throat.

A week passed as the area continued to spread. The second vet called and suggested I return to the first vet for a long-term antibiotic shot to ward off secondary infections. I did that and asked if he had anything that would reduce her pain on the raw areas. He gave me Neo-Predef, a powder application for open wounds that anesthetized and clotted the clear ooze.

Hellion hated the pills and as any good cat will do, she became expert at holding the pill (actually ¼ of a pill) in her mouth until she could spit it out. Since the hiss of the Conzol spray freaked her out, I began applying the Conzol with a cotton ball. I also bathed her.

Let me just say that bathing a cat is never easy, but when you’re supposed to keep the shampoo on the cat for ten minutes before rinsing, it’s pretty much impossible. First, a wet, shampoo-slicked cat becomes a self-propelled torpedo in the hands. The only option was to hold her by the scruff of the neck, but this was precisely where the fungus had taken hold. She flew out of my hands more than once and after five minutes and a complete drenching with anti-fungal shampoo, I deemed it good enough.

So by now my sweet little kitty had started to fear me and it broke my heart to have to hold her down to treat the wounds and force the pill down her throat. We struggled along for another two weeks as the horror continued to spread, juicy with clear liquid and hair loss across her shoulders and around the other side of her head. The lab results finally came back – no one had clarified that 7-10 days meant working days. And I had to call the vet to get the information.

Three days later, Hellion began throwing up her food and refusing to eat. By now I was researching alternate meds and learning that all oral meds for ringworm cause liver damage among other things. I also learned that the function of these meds was to reduce the proliferation of the fungal spores by making the hair less susceptible to host the spores. Talk about killing an ant with a hammer!

I stopped the oral meds immediately but continued applying the Conzol. The raw areas continued to spread over the next three days with some of the areas bleeding and forming large scabs. She was miserable, so I went the alternative route, reading my herbal remedies book and learning that 8-10 drops of tea tree oil in a pint of water made an effective topical treatment for ringworm. I stopped the Conzol entirely.

For a week, I used the tea tree oil solution. The spread of the raw areas decreased but the wounds weren’t healing. I continued to use the powder which soothed the raw areas, but she had begun scratching and several areas were bloody.

Then I remembered two things. In all my searching for information, I had run across the statement that ringworm is the same fungus as athlete’s foot. I also suddenly remembered that when my son was in his late teens and struggling with athlete’s foot, we tried a home remedy (after over-the-counter stuff didn’t work). He soaked his feet in apple cider vinegar and the athlete’s foot cleared up.

Almost healed from what was a bloody oozing mess two weeks ago.

So now I began using apple cider vinegar on Hellion’s wounds three times a day. This was Bragg brand Organic Apple Cider Vinegar (raw, unfiltered, ‘with the mother,’ unpasturized). The vinegar didn’t provoke a painful reaction on the raw places like I thought it would. Hellion seemed to actually like it. In THREE DAYS there were no new places and the wounds were healing. After another two days, I stopped applying the vinegar and in the ensuing week, there has been no recurrence, no new areas, and all the miserably wounded areas are almost healed.

Maybe this is an anomaly. Maybe vinegar wouldn’t cure all ringworm. But this experience has reminded me that modern chemistry and mainline physicians/vets would benefit from a little more knowledge about inexpensive, practical, traditional cures.

Hair starting to grow back, no open wounds.