Existence is a slippery construct, it seems to me. I tend to embrace the rational, the concrete, which makes it difficult for me to drift off into theorizing about other dimensions or other possible spheres of existence aside from our three-dimensional sensory world. But all that is countered by my own very bizarre personal experiences.

So far, I have refrained from talking about this because, well, people tend to look at you oddly when you bring up stuff like this. But hey, I’m not getting any younger and I want to put these experiences on the record. For what it’s worth.

In the mid-1970s, I was living in a rural area in a small cabin while my new husband and I tried to get a house built. The cabin sat on a ridge of pasture land surrounded by oak-hickory forest. To the north, the land fell away sharply into steep wooded hillsides. To the south, the pasture land dropped slowly for about a quarter mile before it too veered down forested hillsides. Ozark land verging into the Boston Mountains.

From the window of the cabin, looking west, the view spread across maybe forty acres of pasture and pond with woods all around. Midway in that field, I saw them one day, a man and woman standing side by side in the grass, facing me from about fifty yards away. Far enough that I couldn’t see facial detail, close enough that I could observe their clothing and posture.

They appeared in the corner of my eye. When I turned to stare, they vanished.

The man wore a brown suit and a brown hat, a vest and white shirt, the style dating to the mid-19th century. The woman’s dress was long and slightly full, what I assume would have been a modest garb with petticoat for someone who needed to walk across rough land. She too wore a hat, a straw hat held by a tie under her chin.

I saw them a few more times after I learned not to look directly. Each time they stood together, the man in his brown suit of clothes, not fancy, and the woman in a gray cotton dress with long sleeves and long skirt, the bodice fitted in the style of the times. I wondered at their presence, whether they had died there while their spirits remained, whether they had lived in that spot and attached themselves emotionally so that wherever they went afterwards, their energy remained there.

I’m a writer so I can think up stuff like that, their story, why I saw them. So I really can’t say whether those ideas explaining their presence were from them or from me.

A few years later, after moving into the new house, I had another sighting. Not the same place, but across the road and onto a wooded hill. From my office window, I can still point out the exact spot, a small clearing at the highest elevation of this entire ridge. At some previous time, a massive old tree had fallen and left the spot open to sunlight. I’ve walked out there over the years since, careful to take such jaunts in winter when the ticks aren’t out. There are large flat rocks like paving stones alongside the fallen tree, creating a defined space about twenty feet square.

I had not discovered that spot until the day of the sighting. I was staring into the distance from what then was a child’s bedroom, taking a time out from marriage, motherhood, and the demands of my profession. Two individuals appeared, again at the edge of my peripheral vision so I could only see them indirectly. These were Natives, two men dressed in deerskins and carrying the weapons of their culture. They were looking east while I observed them to my south. 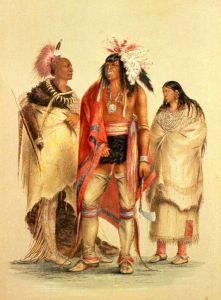 Rendering of Osage First People by George Catlin. The Osage claimed this area for hunting grounds, moved off involuntarily when the U. S. government forced the Cherokee to relocate. Soon after, the Cherokee were also forced west into Indian Territory (Oklahoma). I think what I saw were Osage.

They were waiting for someone, or so the thought struck me. I saw a Native woman there once, alone, her long deerskin dress finely made as she, too, waited for someone. I saw them a few more times over the coming years, but as my life picked up speed and my time for staring out windows diminished to nearly nothing, I saw no more people hovering at the brink of this dimension.

And that’s what I’ve come to believe has occurred. Perhaps elevation has something to do with this portal, because the elevation is about the same for both spots. I reached that conclusion after a third and more disturbing incident that occurred twenty years later.

A friend had come to stay with me while she searched for a place to live. She had lived in Europe for several years, and on her journey back to the States had stayed for a time in London with an old friend. He was ailing and subsequently died. She told me about her mysterious experience with his ghost visiting her after his death.

After returning to the States, she lived at my house maybe two or three months before finding a rental she liked. After she moved out, a month or so later, I was sitting in the living room watching television like I did every night when I suddenly became aware of another presence in the house. The hair went up on my neck.

At first I tried to convince myself it was my imagination, because that’s what we all do at moments like that, right? Then I reasoned that if someone had come in at the back end of the house through that seldom-used door, I would have heard it. It didn’t open without a creak. I heard no creak.

But after several minutes of very eerie energy wafting through the house, I forced myself to go back there. I slowly walked the thirty feet down the hallway to that back door, gooseflesh on my arms. I even stopped to pick up a large bamboo rod to use on an intruder. I flipped on lights, calling out ‘Who’s there?’

When I got to the room with the door, it was empty. So was the rest of that part of the house, including closets and under the beds. Yes, I checked. And the door was locked. But Something was there, an energy that was so strong and so haunting that I could feel it all around me.

I realized it was the ghost of my friend’s friend. I thought it must have followed her, since she was the person who had seen him through his last days. I remembered her remarks that she had visited with the ghost more than once.

Well, thanks a lot! I didn’t need that ghost and I didn’t appreciate her leaving it here with me.

It was hostile, maybe because she had left it behind. I didn’t trust it. Didn’t want it. But, I reasoned, it was likely just lost.

So I addressed it. I stood there in the rooms she had stayed in and told it this wasn’t where it needed to be. I tried to change my energy from fear and resistance to a more loving and sympathetic frame. I said it would rest better if it joined the other spirits in the places they lived. I told it to go to the light.

I thought it had listened, because the presence seemed to leave. Later, though, when I went back there after a few days, my eye caught on a work of art one of my kids had done in grade school. Taking pride of place near the end of the hallway, it was well done rendering of a clown with a tear drop on its cheek that had always made it a sad image.

Well, now the image was not sad. It was demonic.

The ghost had taken up residence.

Disturbed by what was either a supernatural presence existing within my house or, alternatively, the fact that I was losing my mind, I ended up asking my daughter to take the art to her dad. Where it remains. I have not been bothered by that ghost again.

There have been other transient ellipses of space and time at that end of the house, which isn’t space inhabited unless one of my adult children come to stay. One or the other of them has experienced unexplained sounds or an energy presence, enough that I’m fairly convinced—at least on that matter – that I’m not losing my mind.

But it occurs to me, in retrospect, that this was at the same elevation and in almost a straight line along this ridge with the other two occurrences. And in contemplating this, I have concluded that there might be a wrinkle in time here, a portal of sorts that cracks along this ridge and allows transitory visitations by one or another realm of existence.

I’m wondering if I’ll come back to visit, too. 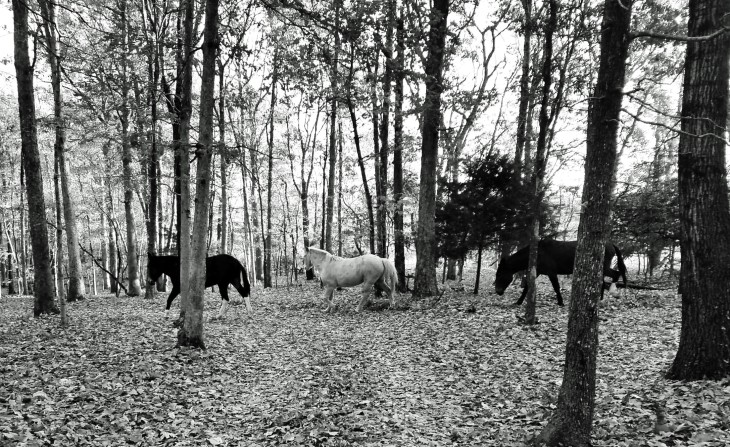 One day they appeared, walking across my land. Then they were gone.