Excerpted from the book, Gem’s Gems — a memoir of my mother, Carmyn Gem [Morrow] Pitts.

[Her father Tom Morrow] ventured east into Madison County and ended up at St. Paul where the logging boom was in full steam. He brought his family to live first in a small house northwest of St. Paul before settling into the Casteel place, a two-story house with a bay window and porches upstairs and down, high upon a mountainside overlooking the White River Valley. They enjoyed a glorious summer in this scenic valley before cotton-picking time called them back to Texas.

Tom gathered his St. Paul crops and left Grandpa Clark in charge of the house and getting the sorghum cane to the mill. Left behind was the furniture—a wood burning cookstove, iron bedsteads and bedding, a rocking chair, table and benches, a marble-top round table, Sylvia’s “Princess” dresser with oval mirror, a small drop leaf desk, and a “matting” box with hinged lid Tom had built out of lathe for Sylvia’s quilts [Carmyn’s mother]. The family packed their “batchin’” equipment—a camp stove, a few quilts, feather bed, and feather bolsters, a white enamel bucket with plates, cups, and two serving bowls, the iron skillet, and a deep aluminum stewer Sylvia used to soak whole grain wheat overnight—into the beloved Baby Overland and headed south. Not left behind were the family cat Snowball and the German Shepherd dog “Lightnin’,” who rode on the fender.

On the journey, they stopped along the road each night and made campfires to cook supper. They would stop at a house to ask if they could get water at their spring and camp for the night. Mama made pallets for the younger children to sleep on in the truck and Papa, Durward, Douglas and Graydon slept on pallets on the ground under the truck. Once when they stopped at a house and asked to use the spring, the lady of the house brought them fresh buttermilk. 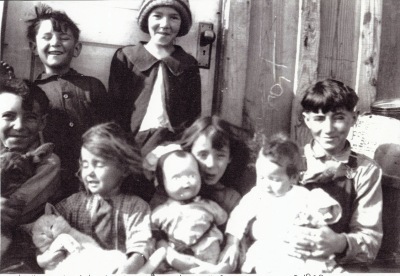 Upon arriving in Texas, they lived first in a cotton-picking shack at one of Sylvia’s sister’s place in Grayson County. After picking for two weeks, they moved on to another of Sylvia’s sister’s farms near Vera in Knox County where they stayed for four weeks. The shacks were crudely built one-room structures about twelve feet by fourteen feet with two windows and a door. Aunt Lillian fixed up their shack at Crosby County for her sister Sylvia and family to live in, scrubbed clean with curtains on the windows. She loaned them a coal-oil stove with an oven. They picked their cotton for three weeks and then finished the season in a shack near Morrison.

In the winter of 1928, the Tom and Sylvia Morrow family moved back to the Casteel place in St. Paul, Arkansas, but Grandpa Clark convinced Tom that the ground was too rocky for farming, so they rented a house together—the Greenway place—about 1.5 miles southwest of Springdale (near the present-day Wal-Mart). It was a temporary home for the two weeks it took Tom to find “Trouble’s End,” the name of the place in Springdale that was their first home with a bathroom and running water. Their seventh child Una May was born here. They had apples and strawberries, and were joined again by the grandparents, who again kept the house when Tom began preparing his family for another summer run back to Texas to pick cotton.

Tom traded the Baby Overland for a big truck, made a wooden box for the pet cat and a puppy to ride in, and the German Shepherd rode on the fender. On the journey, Sylvia and girls slept in the truck while Tom and the boys slept on pallets under the truck. Back in Texas, near Littlefield, they lived in a shack and picked cotton, but the kids all came down with whooping cough, so they couldn’t return to Arkansas until March 1929.

Back in Springdale, they discovered that Grandpa Clark had failed to pay rent at “Trouble’s End,” and had moved three miles east of Springdale to the Crane place. He had rented a nearby house, the Austin place, for Tom’s family, but it was only one bedroom. Tom closed in the breezeway to the smokehouse to provide more room, but that fall he found the Nix place with three bedrooms and a big corner porch. He moved the family there and went to Texas to haul grain from November until February 1930. 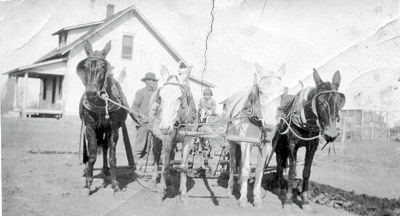 Tom Morrow with his mule team, baby on the wagon seat

Read the rest of Gem’s Gems! Available at Amazon.com