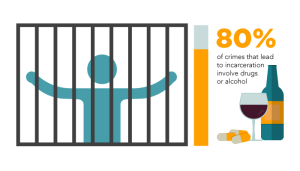 James Phillip Womack, age 31, was sentenced to nine years in prison in mid-April 2019 after pleading guilty to drug and firearm related charges. The drug charges included possession of a controlled substance, possession of a counterfeit substance with intent to deliver, and two counts of possession of drug paraphernalia. The firearms charge had to do with his previous felony conviction which barred him from possessing a firearm.

This isn’t a new problem for James. In 2010 at the age of 21, he pleaded guilty to conspiracy to deliver a controlled substance for which he received a ten year sentence. He mitigated that sentence by serving 105 days in a boot camp program where Army sergeant wannabes yelled, threatened, and physically and mentally harassed its inductees in the idea that this would scare them out of repeating the offense.

He was subsequently arrested for parole violations in 2011 and 2012, probably because he tested positive in mandated drug tests.

So by now James has racked up an extensive record of convictions which will never go away, which label him as a criminal: “lawbreaker, offender, villain, delinquent, malefactor, culprit, wrongdoer, transgressor, sinner.” Not a victim of one of the world’s most insidious illnesses, but rather a person purposefully doing wrong things.

This is typical for persons addicted to a substance of any kind. Incidentally, the substance involved in James’ misadventures is not named in arrest reports because the State of Arkansas records no longer name the substance involved in the arrest. That’s probably because back in the early 2000s, advocacy groups started releasing regular reports of arrests per substance, revealing that despite all the rhetoric about meth, the majority (up to 70%) of “drug arrests” were for marijuana.

We don’t know if all this outrage over James is about marijuana. But his outlook isn’t good. He’s the son of Arkansas’ 3rd District Congressman Steve Womack, an ex-military strutting cock with a crewcut and firm ideas about authority. Womack went from thirty years in the Army National Guard to working as a consultant for Merrill Lynch, which pretty much reveals where his values lie.

For a clue to Steve Womack’s personality, consider that as Congressman, he voted against allowing veterans access to medical marijuana per their Veterans Health Administration doctor’s recommendation, even if legal in their state.

As a father, when asked about his son’s most recent conviction, Womack stated that “Phillip is just a young man that has an addiction. His family has been coping with it for years like thousands of other families. They (his family) love him and they have a lot of hope for his future and that he is going to turn his life around.”[1]

Where did ‘love’ factor into this? As Congressman, Steve Womack has unlimited access to the latest studies and research findings showing that addiction is an illness, that treatment is the route to averting such tragedy. Punishment through incarceration is not an effective response to addiction. Even a fifteen-minute review of available literature on treatment versus incarceration makes it impossible to ignore the ineffectiveness of the criminal justice system in treating addiction.

That’s assuming this growing criminal record for James is about a serious drug like meth or opiates. If it’s all about marijuana, then he should never have been arrested in the first place.  Marijuana is not addictive.

Steve Womack is clearly not interested in learning anything. Anyone who pushes their 21-year-old child into a prison boot camp has only one thing in mind—punishment. Because spare the rod, spoil the child has been the guiding rule for this kind of parent. And Arkansas overflows with similar parenting.

Hutchinson’s son, like Womack’s, has a drug and alcohol problem.  William Asa Hutchinson III, an attorney, was arrested on his fourth DWI in 2018, having previously been charged in 1996 when age twenty and again in 2001. He crashed his truck in 2016 for yet another DWI. In May of 2016, after receiving the DWI arrest, Hutchinson was arrested in Alabama on charges that alleged he tried to sneak a psychoactive drug into a music festival.

Congressman Womack, like Hutchinson as congressman and as head of the U. S. Drug Enforcement Agency, has had every opportunity to initiate legislation that would direct funding to community treatment centers where anyone can walk in and get the help they need. He has the power to work toward legalization of all drugs so that arrests for drug use don’t put young people on the devastating path to the criminal justice system. Labeling drug users as criminals only amplifies their inner demons, their sense of low self-worth that finds relief only in yet another dose.

Without doubt, these “loving” fathers have ruled their sons with an iron hand, ready to punish for any failing. So the congressman’s lament rings hollow. It’s not that he hopes his son is going to “turn his life around.” It’s that he hopes the authority of prison will succeed where his own personal authority has failed. He can’t see that this forceful approach only drives his son deeper into his need for drugs.

One would think that sooner or later these old patriarchal ideas would come into focus for such men. But no, even though it’s not working, they keep doing it. It’s their children who pay the price, they and the rest of us on the hook for upwards to $50,000 per year for each inmate in our state prisons, a cost that doesn’t include arrests, court time, and parole/probation expenses. It’s a sick system, and the sooner we shift to recognition of addiction as an illness instead of crime, the better off everyone will be.

Except, perhaps, the holy authority dinosaurs who would rather sacrifice their children than change.