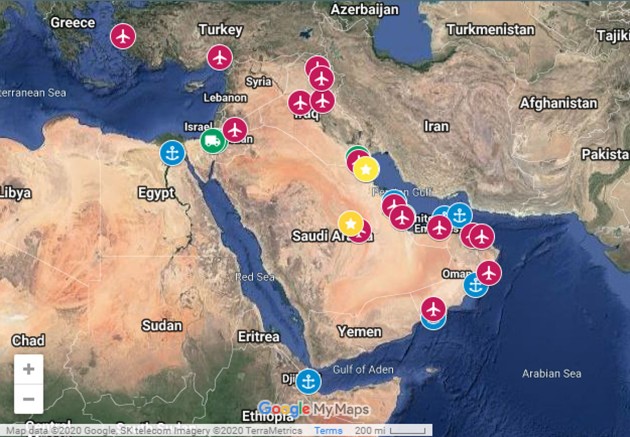 US military bases in the Middle East. Afghanistan is not considered part of that region.

For a long time, oil was the lure to involve the U.S. in the affairs of the Middle East. An equally important factor in our presence there was to protect the newly established state of Israel. But since the end of the Cold War in 1980, the Middle East has become the battleground in our proxy war with Russia.

About 20% of the U.S. oil supply comes from the Middle East, largely Saudi Arabia. You can fill in the blanks about how that fact has affected our foreign policy—trillions in military spending, nearly 40,000 American deaths, and moral compromise are just a few.

Consider the outcome of walking away from the Middle East’s oil. At the worst, we’d lose 20% of our oil supply, although other suppliers wait in the wings making such an outcome rather unlikely. But let’s consider it.

Ethylene and propylene are the two dominant petrochemicals: in 2016, the U.S. produced over 26 million tons of ethylene and over 14 million tons of propylene. Ethylene is primarily converted into polyethylene (the most common plastic, used in thousands of applications), but is also used to make other plastics such as polyvinylchloride (PVC, for pipes and home siding) and polystyrene (used as a general plastic and as Styrofoam for insulation and packaging). Propylene is mostly converted into polypropylene for fibers, carpets, and hard plastic; some propylene produced during oil refining is used to make compounds that are added to gasoline to improve performance. Both ethylene and propylene are used to make many other chemicals and materials with many uses, including specialty plastics, detergents, solvents, lubricants, pharmaceuticals, synthetic rubbers, and more.

Fertilizers – hydrogen derived from methane (the main ingredient in natural gas) is combined at high temperatures with nitrogen extracted from air to make almost all of the ammonia in the world (a small amount of ammonia is produced using other sources of hydrogen such as propane, naphtha, or gasified coal). About 88% of U.S. ammonia consumption is used as the nitrogen source for fertilizer. Other important uses of ammonia include household and industrial cleaning products, refrigerants, and in the manufacturing of plastics, dyes and explosives.

Pharmaceuticals – almost all pharmaceuticals are made from chemical feedstocks manufactured from petrochemicals and their derivatives.

Road asphalt consists of roughly 95% crushed stone, sand, and gravel; the remaining 5% is a thick, dark oil known as asphalt or bitumen, which occurs naturally in some rocks but is also produced by oil refining.[1] 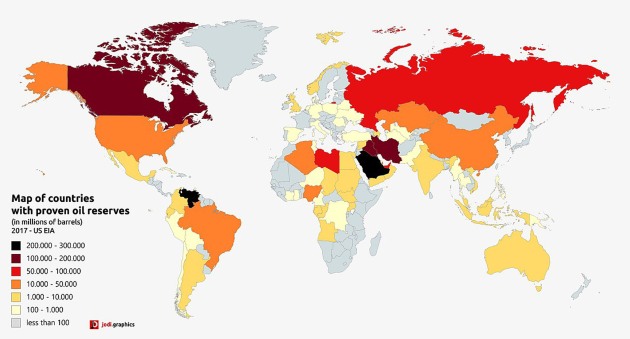 Other sources of oil to take up the 20% loss from Middle East oil? Consider Venezuela, where U.S. meddling in their political affairs has reduced the government to chaos and the people live in desperate poverty. [This is the Middle East of the future, complete with terrorists who hate us and don’t have to travel far to find us.] Oil supplies in Venezuela are estimated to last another 350 years. Surely that’s enough to get the U.S. through another fifty years or so, enough time for us to figure out viable alternatives to oil.

As for Israel, currently U.S. taxpayers are spending over $3 billion a year in support of Israel. Most assume this is to provide security for a small Jewish nation in the face of threats from the Muslim nations surrounding it. But that’s not it.

Were Israel’s security interests paramount in the eyes of American policymakers, U.S. aid to Israel would have been highest in the early years of the existence of the Jewish state, when its democratic institutions were strongest and its strategic situation most vulnerable, and would have declined as its military power grew dramatically and its repression against Palestinians in the occupied territories increased. Instead, the trend has been in just the opposite direction: major U.S. military and economic aid did not begin until after the 1967 war. Indeed, 99% of U.S. military assistance to Israel since its establishment came only after Israel proved itself to be far stronger than any combination of Arab armies and after Israeli occupation forces became the rulers of a large Palestinian population.

…In the hypothetical event that all U.S. aid to Israel were immediately cut off, it would be many years before Israel would be under significantly greater military threat than it is today. Israel has both a major domestic arms industry and an existing military force far more capable and powerful than any conceivable combination of opposing forces. There would be no question of Israel’s survival being at risk militarily in the foreseeable future.

…the continued high levels of U.S. aid to Israel comes not out of concern for Israel’s survival, but as a result of the U.S. desire for Israel to continue its political dominance of the Palestinians and its military dominance of the region.

There are other reasons than military for the billions of dollars sent by the U.S. to Israel each year. At the top of that list is religion, specifically evangelical Christians who believe Israel plays a pivotal role in the ‘second coming.’

Based in part on a messianic theology that sees the ingathering of Jews to the Holy Land as a precursor for the second coming of Christ, the battle between Israelis and Palestinians is, in their eyes, simply a continuation of the battle between the Israelites and the Philistines, with God in the role of a cosmic real estate agent who has deemed that the land belongs to Israel alone–secular notions regarding international law and the right of self-determination notwithstanding.[2]

Compared to the influence of the Christian Right, the role of Jewish interests is minimal but not without power. Not to discount the lobbying from the arms industry, which contributes five times more money to congressional campaigns than pro-Israeli groups. Those who argue for a continued close relationship with Israel cite trade benefits to both nations, but there’s nothing in that trade which requires a continuing U.S. payout of billions of dollars in foreign aid annually.

The U.S. role in the Middle East has become increasingly intractable and tenuous, with no end in sight. Virtually all the terrorist hatred of the U.S. leading to acts like 9/11 and their determination to destroy our nation results from our overwhelming presence in their backyards.  We might point to groups like the Kurds whose existence is under threat from Turkey as justification for our continuing military occupation of Middle Eastern nations, but is that really what it’s all about?

No, I don’t think so. Consider the money.

According to data compiled by the Forum on the Arms Trade from the U.S. Foreign Military Sales program, some $25.5 billion in deals have been agreed with nine countries around the Middle East and North Africa (MENA) so far this year (2019). That compares to just $11.8 billion in 2018, marking a 118% year-on-year rise. …Globally, U.S. arms sales have increased by 42% this year, to a total of $69.7 billion, the highest level since 2010. 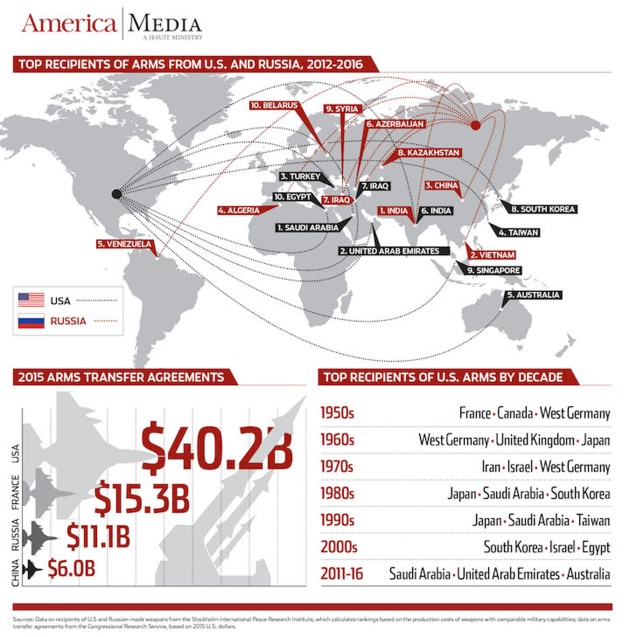 Arms sales are often an issue in Congressional deliberations, but the current president encourages it. Over half of those sales goes to the Middle East, often ending up in the wrong hands.

President Donald Trump has often made arms sales a central element of his relationship with Gulf rulers and has vetoed Congressional moves to block the trade. This is despite evidence of how arms sold to the UAE and Saudi Arabia have at times ended up in the hands of Washington’s opponents. Analysts say the large arms sales of recent years from the U.S. and other suppliers have been a critical factor behind the rising instability around the Middle East.[3]

The role of the U.S. in military activities, foreign aid to Israel, and arms sales is responsible for the current trillion dollar deficit and an unconscionable moral failure in our nation’s leadership regarding the Middle East. We need to get out of our proxy war against Russia and stop the flow of money and arms. Our role in North Africa, Afghanistan, and other foreign hot spots also deserves strict reconsideration.