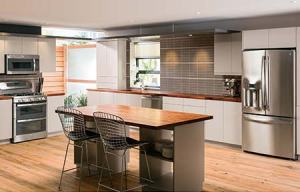 With this latest wrinkle in my life that has provided a modest financial margin to do things like put a new roof on my house, I’ve also invested in new appliances. This will be the first time in my life I’ve been able to have nice new kitchen appliances. How thrilling!

One would think that purchasing something new would lend a warm feeling of excitement and satisfaction. That’s what we see in advertisements, isn’t it – smiling happy faces with shiny new products? Well, let me tell you…

Previously, I purchased what I had to have from Lowes because I had a charge account there. Never mind their interest rate of 21-25%. No, never mind that. (This is the quiet assault on the poor, those who never can lay out $1,200 for a new fridge when the old one suddenly stops working and so end up paying far more because of interest.)

But now, with my new cash budget in hand, I didn’t need to charge anything!

So I went to Lowe’s for a new stove and dishwasher.  My existing stove had been in service for about 20 years, a purchase made on a credit card at a store in Springdale that carries new stuff but specializes in scratched or dented appliances. The stove was bashed in on the right side and the bottom drawer never worked properly, but the burners and oven performed well until the last several years during which time the right front burner stopped working. Mice had periodically invaded the insulation behind the oven, and so baking produced a slightly mousy odor.

Plus, you know how stoves get – janky – no matter how carefully you clean. Scratched enamel and burnt on film on the burner grids.

Then there was the over-the-range microwave, used when I got it with a break in the bottom door frame. In order to replace the light bulb, a series of tiny screws had to be removed to drop a glass panel. The front grill for ventilation could not be completely cleaned as the intake grid vanished into the upper areas of the microwave. No turntable. Not 1000 watt.

Then there was the dishwasher, installed sometime in the early ‘90s. The panels on the door had long since developed a rich array of rust spots. The door spring busted years ago and I replaced it with a semi-functional spring that made loud squawking noises when the door opened. The bottom spray arm lost part of its assembly at some point, so washing the lower rack became hit or miss with plates spaced widely apart and requiring pre-washing by hand. So yeah, give me a new dishwasher!

But here I am, trying to obtain all stainless steel appliances. At least my washer and dryer are white. 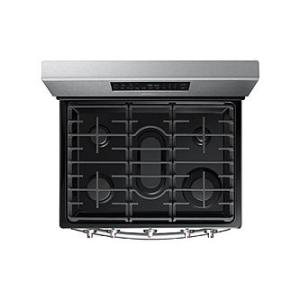 So at Lowe’s I quickly discovered that all their ranges have five burners with metal gridwork completely covering the top of the stove and reminiscent of a medieval drawbridge gate. What the hell? Who decided this? Who wants to lift (and clean) massive metal burners? Where are we supposed to place spoons or spatulas we use while cooking?

At Lowe’s website, I found four-burner stoves in stainless. Problem solved. But no – wait. I read the fine print, then called the store, and learned that installation of said stove-microwave-dishwasher involved a whole new level of expense. For the range, they’d require $60 to convert to propane and another $155 to send a plumber for the installation. (Turn off gas supply, unscrew old hose, screw on new hose…)

For the microwave, they’d require $105 to install and would not touch installation if the old microwave had been direct wired. Well, of course mine had been.

Then for the dishwasher, they’d require $139 for a plumber to install plus $20 for the new water connection hose. And, same as microwave, they wouldn’t touch it if it had been hardwired. (See previous paragraph.)

No, they didn’t offer a combination of plumber duties between stove and dishwasher in order to reduce the cost.

Hell, I could have bought an entire additional appliance for all that.

Then I checked in with the place in Springdale. Sure enough, a very friendly salesman got on the phone and told me everything I wanted to hear. Stove – slightly cheaper, no problem. Dishwasher, cheaper. Microwave cheaper. And all installed by one guy for about $150. Get outta here!

Plus – they would haul off all my old stuff at no charge. Lowe’s wanted $20 for each old appliance. 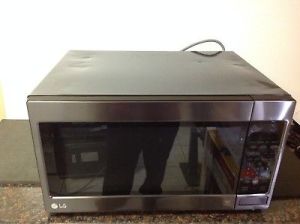 So several days later the truck arrives and right away I see problems. The microwave is enormous and dented on the right side. The range is white – and not adjusted for propane. At least the dishwasher seemed ok. But no one had lined up the installer.

Thus began a three week saga that is still not finished. The store agreed to switch the massive dented microwave (dent NOT mentioned by salesman) for a small countertop model plus range hood. Dishwasher doesn’t really dry the dishes unless I put it on a long ‘heated dry’ cycle, but that’s part of the slow deterioration of manufacturing quality, not a problem caused by the store. Second delivery of range, adjusted for propane, was a FIVE BURNER model. Are you serious?

Went to store where they admitted they had zero four-burner stainless ranges in stock. What? After I put my fists on my hips and shifted to a slightly louder tone of voice, they finally agreed to order a four-burner, stainless steel range. 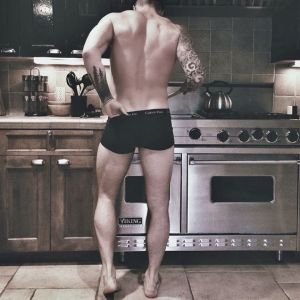 Here’s the model I really wanted but they didn’t have him in stock.

Even though I loathe driving to Springdale, I will visit the store BEFORE they deliver the range to see if they’ve adjusted the burners properly because the white stove currently in my kitchen, which they ‘adjusted’ at the store, has no low flame. Turn the burner to ‘low’ and the flames are just as high as they are on ‘high.’ They said that had to be a problem with my propane tank pressure. But it wasn’t a problem with my old stove, so it can’t be that my propane tank has spontaneously jacked up the pressure.

Also, it turned out the installer’s fee wasn’t part of what I paid the store, which wasn’t made clear. (In one of my six phone conversations with the store manager, I asked if they’d fired the salesman yet. They have not.) Plus installer had tried to call me to coordinate his arrival with the delivery but the store hadn’t given him the right phone numbers, so everything on the first delivery arrival had to be rescheduled to match his availability. And the installation fee wasn’t $150 but $275 because he had to wire two outlets at $50 each and connect a new drain line for the dishwasher. Still, even at $275, it was cheaper than Lowe’s.

Highway robbery: Fifty bucks to wire an outlet to an existing wire.

I’m not sure how much more of this consumer joy ride I can stand. 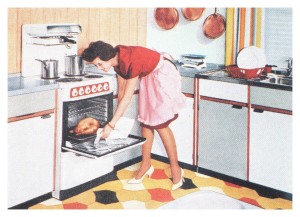