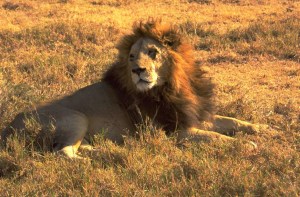 Once upon a time, men proved their bravery and strength by killing animals. Mammoth flesh was needed for food, dire wolves and cave bears threatened their families. Then we got tractors and supermarkets.

It all happened so fast. Only a few thousand years separate us from the need to kill or be killed, the need to slaughter for food. Our genes haven’t caught up with our culture.

Actually, quite a few men today manage to see themselves as powerful and successful while selling real estate for a living. Or programming software. Or teaching school. These men jog for sport or hang out at basketball courts. Or write books.

Who are these men who have to go kill lions?

What backwater of these male minds still finds pleasure in killing? What short circuit in brain function ignores the endangered status of rhino or leopard? What personal sickness requires going to another continent and tracking down an animal in its own habitat in order to kill it, skin it, and take its head as a trophy?

Is this a failure of nature or nurture?

Perhaps not coincidentally, the particular cretin whose acts have been the subject of heated discussion over the last few days has also been in trouble for sexually harassing women.

If we knew all Walter Palmer’s secrets, what other offensive behavior would come to light? That he was verbally or physically abusive to women, children, or employees? That he repressed his homosexual tendencies? Participated in adolescent bullying? Tortured small animals as a child?

All these and more are traits of men who aren’t real men. Oh, they may make money. They may wear gold Rolex watches and golf with the mayor. They may gain political office or the corner office.

But as real men, as what it means to be a courageous, intelligent male capable of steering a loving path through a complicated world, these big games hunters are failures. Any time someone has to kill something to be a man, hurt women or his children, insult an underling, hate a minority, that’s the signal that this person is a failure. Anyone who has no respect or affection for lifeforms other than himself is a failure.

Deep down inside he’s a cowering little whelp pissing himself in fear. He needs big guns and trophies to prove his manhood, to drive the goblins out from under his bed. And at the end of the day, victorious over his hapless victim, he is no more reassured than before he began.

Before you start labeling me as a man-hater, I’ll hasten to agree that women sometimes kill big game as well. I see that as a function of an insecure woman’s twisted idea of how to attract a man. Killing may top the charts in that regard, but a woman’s pseudo-practice of predation is similar to plastic surgery, wearing clothes, shoes, and hair styles that compromise the ability to move or see, or the cultivated art of simpering.

Unevolved humans aren’t restricted to the class of people rich enough to fly to Africa and kill lions. They can be Louisiana rednecks who shoot ducks for fun and gig a hundred frogs in one night. They can be publicly righteous Christians who practice incest and sexually molest young girls. They can be tight-assed suburban wannabe warriors with Confederate flag decals on the back windows of their pickup trucks.

All of them terrified. Proudly ignorant. Bewildered by a world that has outgrown them with its computers, educated women, racial integration, and gay marriage.

Aren’t there rules we’re supposed to follow? What do we do when the old rules don’t work and we’re left standing on the corner while the rest of the world marches past? We panic. We have to kill something.