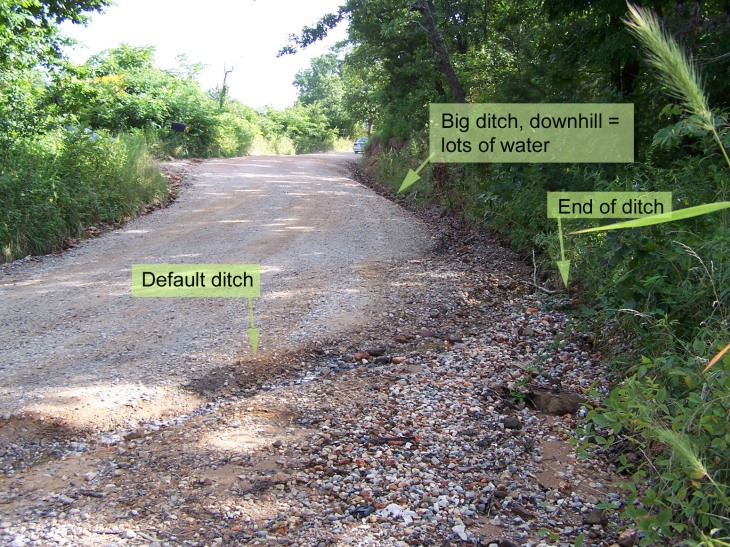 Creek another thirty feet down on the right.

Oh, the wringing of hands as the State of Arkansas once again tries to cough up more money for prisons. One of the poorest states in the nation, Arkansas struggles to pay for schools and roads. But those programs are optional. Prisons are not.

That is, you see, because we must punish Crime.

Thus comes the grand news that Arkansas ranks third in the nation in prison population growth. Not only are prisons stuffed, so are the county jails where duly convicted criminals await prison space. Not only are all lockups in the state overflowing, we’ve now exported hundreds of prisoners to Texas where their for-profit system takes all the money we want to send them.

Most recently, the genius that is the current state legislature has passed a law wherein persons on probation or parole can be stopped and searched not only by parole/probation officers but also by any other law enforcement officer. The arguably reasonable rationale behind this law is that a would-be burglar might be gently nudged along a path of righteousness with more authority figures looking over his shoulder.

They actually believe this will reduce the prison population. My prediction is the opposite. More noses in private business means more marijuana arrests.

The disconnect lies in the reality of present day culture. Whether our criminal codes yet reflect it, marijuana is the new beer. Over half the states have now made marijuana legal for medical use and three (so far) have made it legal for recreational use. In those states, tax revenues are booming while teen drug use and crime in general are down.

We’ll have none of that in Arkansas. No sir.

No, here we prefer to rope goats and dip snuff. Here we produce an annual crop of Bible-thumpin’ preachers in jail for molesting children. Here we have state and federal legislators fixated on regulating a woman’s uterus and other people’s relationships. (I can say these things—I’m a native.)

I live on a dirt road. Periodically the road is graced by the passage of a road grader. The road grader moves dirt around, swiping it from the edges and piling it up in the middle where it is spread along to fill up holes and trenches cut by rain. Next time it rains, the holes appear again.

At the worst spot (pictured above), a cavernous roadside ditch abruptly ends. Water has nowhere to go. So it runs across the road. The solution is amazingly simple: cut the ditch another 30 feet to the creek. Like magic, no more bone-jarring trench.

I’ve long pondered this particular problem. I’ve sent carefully composed letters and drawings to the county road superintendent. I’ve chanced upon the grader mid-task and stopped to belabor my point with the operator. He’s always amiable, working a big cud and nodding while I talk and point. “Yes, Ma’am,” he says.

Then he grades the road exactly the same as before.

That quiet shredding sound you hear is me ripping my hair.

Is getting high a crime? If you get high on alcohol, it’s not a crime. If you zoom around all smiles on your script of Valium or Xanax, not a crime. Face it. People smoke weed. Water runs downhill.

There’s never been a study showing that laws against drugs have been effective in stopping drug use or addiction. All we have to do is look at the status of our prisons to know those laws have failed. We have a greater percentage of people using drugs now than ever before. Great work, guys. Keep filling those holes.

Drug arrests (in the category of ‘crimes against society’) totaled 13,626 with 6965 for marijuana possession and 797 for marijuana sales or manufacture. The next largest subset in drug crimes was 1748 arrests for methamphetamine possession and 481 for meth sales/manufacture. (The other 1218 ‘crimes against society’ include gambling, prostitution, pornography, and weapons laws violations.)

Is possession of marijuana an offense equal to assault? Who is harmed? Equal to shoplifting? Whose goods are stolen? Does it make any sense that almost as many people are arrested for drugs as are arrested for crimes against people?

In 2013, Arkansas prisons held 23,384 inmates. Another 29,946 offenders were on probation and 23,227 on parole. The corrections budget that year was $449 million. We can only guess what percentage of the prison/jail population is serving time for drug offenses because the state doesn’t collect that information.

They don’t want to know.

If drug offenders are convicted at the same rate as offenders in other categories, then we could assume that 30% of our prison population is there for drug offenses and 57% of those for marijuana.

There has always been an element of society which believes its duty is to regulate how people think. Its lineage can be traced to the Inquisition and setting witches on fire. No one argues whether crimes against persons and property should be punished. But the idea that the state should attempt to regulate our minds violates every principle of a free society.

The standard argument in support of drug prohibition involves token concerns about people harming themselves. Worse, people high on drugs can hurt other people. Yes. But people who harm themselves with potato chips or cigarettes aren’t arrested. People trashed on booze can beat up their wives or get behind the wheel and kill a carload of innocent people. But we don’t need alcohol prohibition to prosecute impaired driving or domestic violence.

Aside from trying to arrest our way out of behavior we don’t like, the would-be guardians of our minds have promulgated a flood of anti-drug propaganda. The drug problem flavor of the decade has moved from psychedelics to marijuana to methamphetamines. Now meth is so ’90s. Today the big evil is prescription drugs. (Ironic, considering the incessant television ads hawking drugs for every conceivable human ache and mood.)

By now there’s a nearly-one hundred year tradition of criminalizing certain substances and the persons who use them. The stigma once attached to demon rum has been transferred to a growing list of psychoactive substances. We have no choice. We have to build more prisons.

Arkansas will be among the last to let go of its attempt to control what people do in the privacy of their homes or heads. These folks are still trying to get back to the 19th century. Even though the Bible says nothing on the subject of drug use and relates multiple instances of Jesus Christ Himself using wine—hey, even making it out of water—religious extremists in control of the state refuse to allow statewide alcohol sales and would fight to the death before legalizing marijuana even for medical use.

The facts have been clear for decades. Any cost/benefit analysis would show the terrible price we pay for this futile effort. We’re stuck with the same old reaction, prisons before schools, before roads, before social services and other interventions that have the potential to actually reduce drug abuse.

How long, oh Lord, ’til the ditch is cut to the creek?