A flood of state laws restricting abortion rights have moved us toward the Twilight Zone, a place where a woman no longer would hold agency over the functions of her body. But that genie is out of the bottle. Women will not give up their hard won freedom.

What are these state laws? Some require the doctor to give a woman information about reversing the procedure (part of the emotion strategy) or show her an ultrasound of the fetus (for an extra charge, part of the money strategy). Some ban abortions if a fetal heartbeat can be found (part of the medical strategy). Still other state laws have come in through the back door by restricting when or how abortion clinics can operate, or which medical personnel can provide abortion services (part of the access strategy).

Special interest zealots have pushed laws banning abortion if the fetus shows signs of Down syndrome. Other laws would ban abortion after six weeks or 12 weeks or some other arbitrary period which in many cases would cut off access before the woman even knows she’s pregnant or before prenatal testing could discover genetic or development abnormalities.

But wait. Before progressives stroke out over all this, keep in mind this is part of a long struggle over women’s rights that’s been going on since the beginning of time. Women are not going to accept a step backwards.

I grew up in a time when women weren’t supposed to enjoy sex. It was only men who might indulge in multiple partners while retaining their sterling reputations. In fact, experience with multiple sex partners enhanced a man’s reputation. As the receptacle of male seed whether through premarital or extramarital sex, rape, or marriage relations, women were left to deal with the problem of conception and unwanted pregnancies. The child might be put up for adoption, or for those wealthy enough, a quiet vacation overseas lasted long enough to dispose of the entire issue.

Women weren’t supposed to enjoy sex because receiving male seed and laboring to give birth was the punishment for tempting Adam to defy God’s order not to eat that forbidden apple. Of course Adam wasn’t responsible for what he did with the apple, a perfect metaphor for the male’s lack of responsibility for impregnating a woman.

That’s the story, in a nutshell, of the current furor over abortion rights. Men have to relieve their needs. Women have to clean up after them. If she chooses to abort, conservatives want the procedure to be high risk, out of the hands of medical professionals and back in the alleys so that the price she pays might be sterility or death.

The advent of modern medicine and the pharmaceutical industry gave women birth control pills. The basic research for the pill became possible when Russell Marker discovered that generations of Mexican women had been eating a certain wild yam — the Barbasco root, also called cabeza de negro — for contraception. It was from these yams that Marker was able to extract the progestin that Gregory Pincus combined with estrogen to formulate the first birth control pill. That was the 1950s.

It took another twenty years to clear regulatory and legal hurdles so that women could use the pill for contraception. At first, doctors wouldn’t prescribe it to unmarried women. A court case brought by Planned Parenthood finally cleared the way for all women to gain access to the pill.

In 1973, the Roe v Wade decision granted women the legal right to control what happened inside her body. The Court ruled 7–2 that a right to privacy under the Due Process Clause of the 14th Amendment extended to a woman’s decision to have an abortion, but that this right must be balanced against the state’s interests in regulating abortions: protecting women’s health and protecting the potentiality of human life. Arguing that these state interests became stronger over the course of a pregnancy, the Court resolved this balancing test by tying state regulation of abortion to the third trimester of pregnancy.[1]

Women still have to get a doctor’s prescription to obtain the pill. And religious and conservative groups have murdered doctors, burned clinics, and passed a long string of state laws to fight the Roe v Wade decision. One explanation of this opposition is explained as follows:

Birth control (BC) allows us to separate sex from its “true nature” as a solely procreative act that should be only happen in a heterosexual marriage for the purpose of (or, at least, with ‘openness to’) making babies. When we teach people about BC, allow them easy access to it and condone its use, it divorces sex from this purpose and allows it to become an activity for anyone, regardless of marital status, to partake in for fun, bonding, pleasure, etc. Essentially – because it allows people to have premarital sex without the proper, natural, consequences.

Then, as more people have sex without wanting kids, there is a higher chance that someone will have an unwanted pregnancy as all BC has some failure rate. If all women just practiced abstinence until they were married (which is the only moral and correct path), there would be no abortions…[2]

Never mind that many married women who already have children seek abortions for obvious reasons—more children to feed, clothe, and care for never mind providing suitable education so that each child has a realistic chance at success in life. It also ignores the terrible outcome of fetuses with extreme physical or genetic abnormalities and/or of high risk to the mother’s life.

That is all God’s will, according to the fundamentalists. But so is infertility and that doesn’t keep religionists from seeking artificial insemination. So are cancer and heart attacks and broken bones.

But aside from problems of conception amid the pleasures of sex, the ongoing culture war between conservatives and progressives is about male power and control. Conservative male testicles have been shrinking ever since the female genie emerged from the bottle, since women gained the right to vote, own property in her own name, or seek a divorce. But those little ‘nads have really shriveled since the pill and Roe v Wade.

Under patriarchal beliefs, women were created to serve men, produce his children, and see to their upkeep. This view of women undergirds the current Republican agenda and accounts for evangelical support of a president unfit for office but willing to grant their agenda in order to gain and stay in power.

Thus we have current efforts in various red states to draw the circle tighter around abortion. It’s their belief that the new lineup of SCOTUS justices will find one or more of these state laws as a staging point to overturn Roe. The die is cast. The conservatives finally will have their showdown.

But wait. Does anyone think for an instant that women will shrink back into the shadows and submit to a renewed reign of male authority?

If so, quickly disabuse yourself of that idea. Women will continue to access birth control and abortion, even if the entire industry has to go underground. After all, people drank like fish during alcohol prohibition and smoked marijuana during 90 years of reefer madness.

The genie is out and she’s not going back. 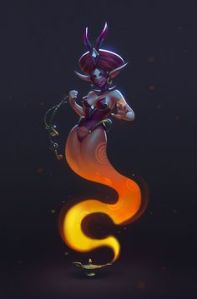 Genie by inSOLense.deviantart.com on @DeviantArt