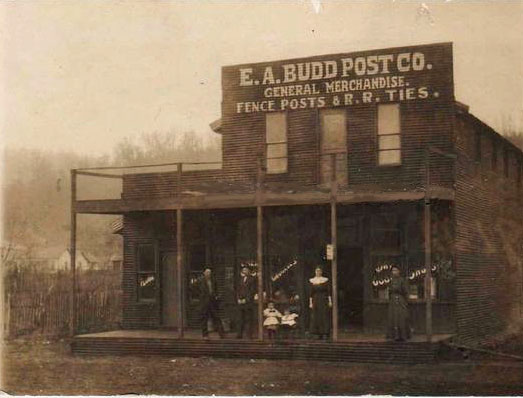 As Robert Winn wrote in his book Winslow: Top of the Ozarks, “[Budd] had a large office with a staff of a dozen young ladies mailing out advertising for fence posts. He shipped out uncounted numbers of fence posts to western states. He also carried a complete line of clothing, shoes, feed, hardware, furniture, and groceries. Mr. Budd had branch stores at Brentwood, Woolsey, West Fork, Porter (Schaberg) Chester, Walker’s Switch, Mountainburg, and Rudy.”

Rex’s success in gaining cases rose not only from his frequent mentions in local media, but also from his enthusiastic and tenacious pursuit of legal options for his clients. In addition to his sharp mind and voracious study of the law, Rex didn’t hesitate to skirt the edges of accepted practice. One anecdote recalls a time when Rex and his client faced a formidable team of well-heeled Little Rock attorneys who traveled to the Madison county courthouse to press their case. In those days, visual aids required to instruct jurors on logistics or scene layout usually depended on the use of a chalkboard. As the Little Rock legal team left the courtroom for a brief recess, Rex strolled past the chalkboard and palmed the chalk. Alas, no further use of the chalkboard could be made.[1] 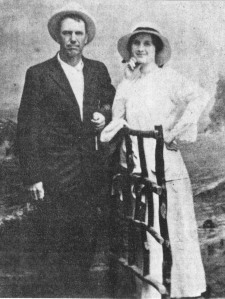 In 1944, Perkins and his partner Tom Sullins took up the case of Elwin A. Budd, founder of Budd Post and Hardwood Company and a longtime prominent businessman in the region. An Illinois native of impoverished background, Budd had built a fortune buying and selling hardwood fence posts during the peak years of Washington County’s timber boom, becoming known as “the man who fenced the West.”[2] He married Nettie Huey in 1903, settled on a place near Brentwood (south Washington County), and in 1908, the couple gained a son. A young woman named Rose Shackelford came to help with the baby and E. A. fell in love with her.

By this time, Budd had built his fence post fortunes into thriving mercantile operations along the railroad at Winslow and Chester, Arkansas, as the route cut south into virgin forest between Fayetteville to Fort Smith. He divorced Nettie and married Rose in 1909 when he was thirty-two and she was fifteen. His relationship with Rose ended tragically just six years later after the couple took an automobile trip to the 1915 Panama-Pacific International Exposition in San Francisco. Pregnant during the arduous journey, Rose gave birth to a stillborn child in October and died four days later.

It was said that the loss of Rose changed E. A. forever. He threw himself into his business. In the 1920s as the timber trade died down, he along with his brother Arthur invested in expansive commercial enterprises in Fayetteville. Their Royal Movie Theater, Royal Barber Shop, Royal Café, and Budd’s Department Store occupied virtually all of the south side of the Fayetteville Square. Budd’s fence post business continued in Fayetteville with warehouses stretching from South Hill Avenue east to South Government Avenue and filling a half block north of the railroad tracks toward Sixth Street (now Martin Luther King Boulevard). Another warehouse, ‘Budd’s Woodcraft and Spokes,’ fronted 808 South Government, a structure recently housing the ‘The Village Sculptor’ ironworks of the modern-day Fayetteville artist Hank Kaminsky and demolished in 2013.

Budd remarried several times, becoming increasingly more depressed and drinking heavily. Beloved by employees as a “likeable, hard-working, and shrewd man with a knack for making money” and credited with creating jobs during the Depression, his work habit was remembered that he “left home in a three-piece suit to sell posts up and down the river, then later in the day changed to a pair of overalls to do the manual labor.”[3] 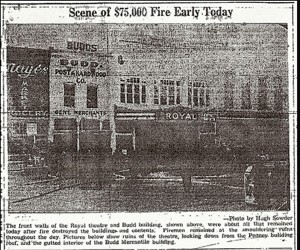 Fire damage January 15, 1940. Headline, Northwest Arkansas Times: “Budd’s Mercantile, Royal Theater, Barber Shop, and Cafe Contents Total Loss” Caption underneath photo: “The front walls of the Royal theatre and Budd building were about all that remained today after fire destroyed the buildings and contents. Firemen remained at the smouldering ruins throughout the day.” Springdale firemen joined the Fayetteville forces in an effort to save other south side buildings.

Misfortune continued to find him, however. Fire swept through his Fayetteville mercantile, theater, barber shop and café on January 15, 1940, resulting in total loss to the contents, as well as destruction of several rented upstairs offices and apartments.

Four years later, on March 27, 1944, Budd allegedly inflicted fatal wounds to Miss Norma Smith, a Zion schoolteacher of long acquaintance with Budd. The trial opened July 11, 1944. The defense team included Perkins, Tom Sullins, and John Mayes. Prosecuting Attorney Jeff Duty was joined by Assistant Prosecutor Glen Wing and Van Buren attorney Dave Partain in Judge J. W. Trimble’s court. Opening testimony for the prosecution came from Pvt. Dale Fields, 26, who recounted his previous Saturday evening at Mitche’s Place with a crowd from Springdale. Upon exiting the building, he said Miss Smith “hollered” at him to come over to the car where she was sitting.

He went over and talked to her for a while, then got in the car and went to Springdale. She drove him home. He made a date with her to see her the next morning. They drove to Noel, Mo., in her car and visited his uncle, Fields said, returning to Fayetteville about 4:30, and that evening she again took him home to Springdale. ‘She asked me to come back and see her any time I wanted to,’ he said.

He didn’t see her any more until March 27, about 8 or 9 o’clock, Fields testified. ‘We were laying on the bed when Mr. Budd came in there…He walked up on the porch, came in the house, turned on the lights, came in the bedroom and told me “‘Time to leave.’”

When questioned by the defense, Fields said Budd did not say that in an angry tone. Fields got up and began to dress, but Miss Smith said that he wasn’t leaving. She went into the living room and argued with Budd. As Fields got the living room, he saw Budd slap her. She fell into a chair and Budd left.

Fields asked her who Budd was but she wouldn’t tell him…she just said he was a business man up town. Budd returned, threw eggs at the house and Norma ran out and stared hollering at him. One egg came through the door was she went out, and splattered on the wall…Fields said he next heard fighting in the yard. He said he had been sitting near the door and could hear the blows, and ‘it sounded like he was hitting her hard.’ Then she yelled for help. Fields went out and when he first saw them they were fighting in the corner of the yard near a tree. He saw Budd hit her in the face one lick with his fist, and…she hit the ground. “Then the law came down there…Budd started to his car.”

After about an hour at the police station, Fields returned to Miss Smith’s house where he found her lying on the bed. “There was a place on her chin and blood was running down the back of her neck coming from under her hair,” he said. He washed her and convinced her to go to a doctor, but when they got to the car, it wouldn’t start. The wires had been cut. Fields tried to find a doctor who would go to the house, but no one came. He stayed with her all night during which time Budd drove up and down the street blowing his horn…

From Chapter 4 of Rex Perkins: A Biography. Available in Fayetteville and West Fork local bookstores. Or at Amazon. 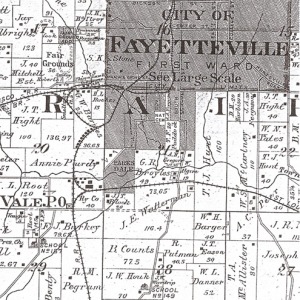 My  new book, Glimpses of Fayetteville’s Past,
features five articles I researched and wrote between 2003 and 2010. These were initially published by the Washington County Historical Society’s quarterly journal, Flashback.

In this paperback collection, these articles about this “lovely” county in Northwest Arkansas have been expanded and updated, and now include photos, maps, and other features that greatly enhance the reading experience.

Here’s an excerpt, from “The History of Fayette Junction”:

…One of the most ambitious men to exploit the timber trade was Hugh F. McDanield, a railroad builder and tie contractor who had come to Fayetteville along with the Frisco. He bought thousands of acres of land within hauling distance of the railroad and sent out teams of men to cut the timber. By the mid-1880s, after a frenzy of cutting in south Washington County, he turned his gaze to the untapped fortune of timber on the steep hillsides of southeast Washington County and southern Madison County, territory most readily accessed along a wide valley long since leveled by the east fork of White River. Mr. McDanield gathered a group of backers and the state granted a charter September 4, 1886, giving authority to issue capital stock valued at $1.5 million, which was the estimated cost to build a rail line through St. Paul and on to Lewisburg, which was a riverboat town on the Arkansas River near Morrilton. McDanield began surveys while local businessman J. F. Mayes worked with property owners to secure rights of way. “On December 4, 1886, a switch was installed in the Frisco main line about a mile south of Fayetteville, and the spot was named Fayette Junction.” Within six months, 25 miles of track had been laid east by southeast through Baldwin, Harris, Elkins, Durham, Thompson, Crosses, Delaney, Patrick, Combs, and finally St. Paul.

Soon after, in 1887, the Frisco bought the so-called “Fayetteville and Little Rock” line from McDanield. It was estimated that in the first year McDanield and partners shipped out more than $2,000,000 worth of hand-hacked white oak railroad ties at an approximate value of twenty-five cents each. Mills ran day and night as people arrived “by train, wagon, on horseback, even afoot” to get a piece of the action along the new track, commonly referred to as the “St. Paul line.” Saloons, hotels, banks, stores, and services from smithing to tailoring sprang up in rail stop communities…